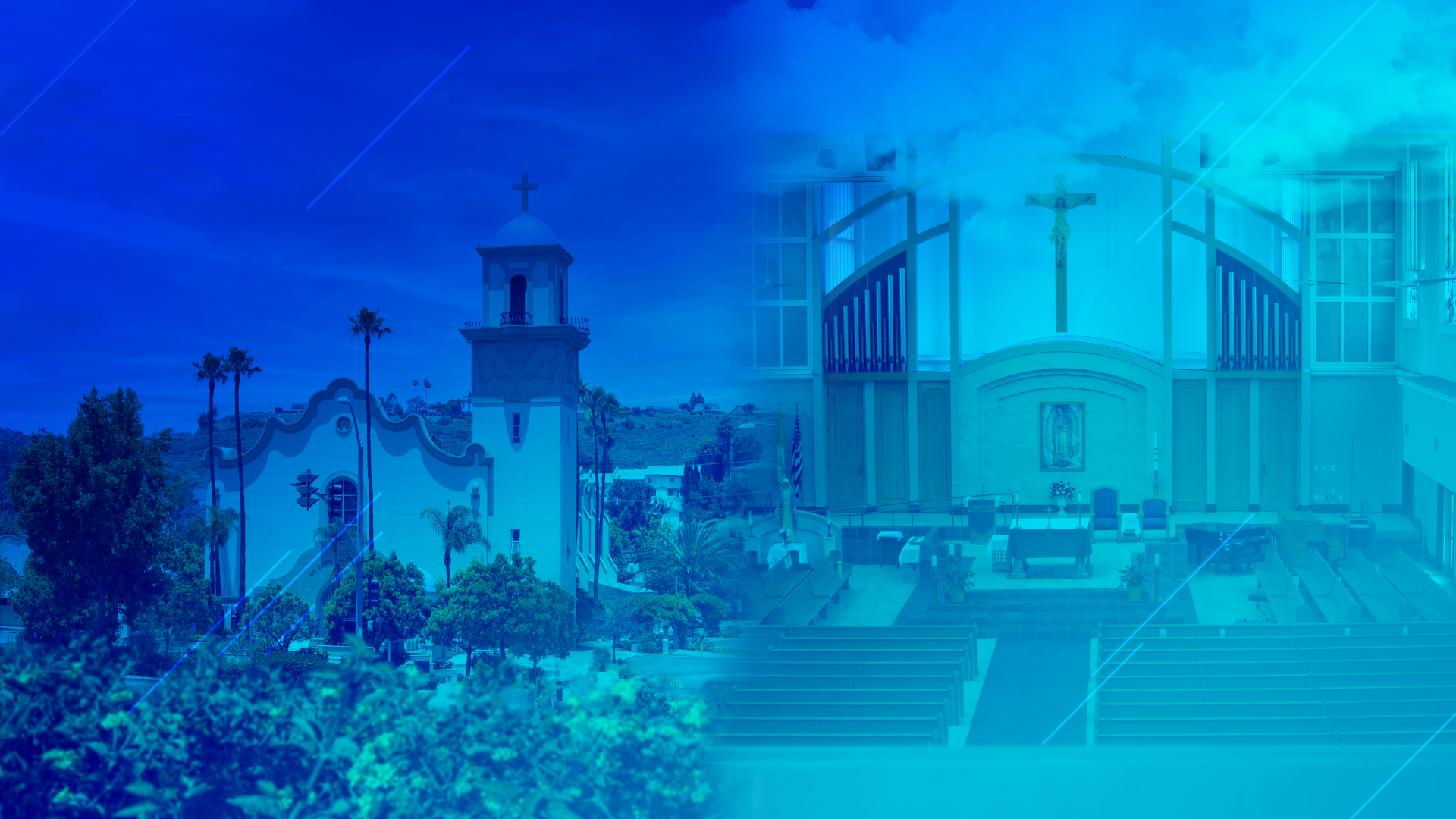 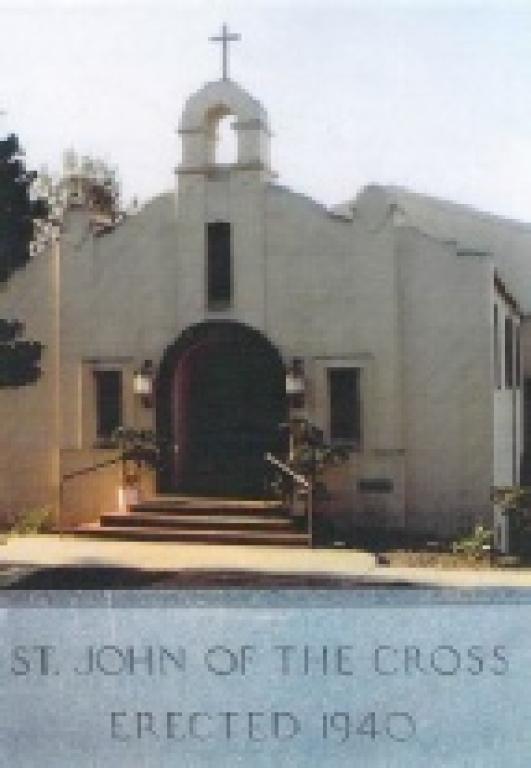 History of St. John of the Cross Catholic Church

The history of St. John of the Cross Catholic Church in Lemon Grove began in 1868 when 4,283 acres of land composed of Lemon Grove, Encanto and La Mesa. Several parcels of land were later sold and the first lemon and orange trees were planted. The raising of the first Catholic Church in Lemon Grove by a few Catholic families in this area formed a fitting and notable milestone in the path of progress of Catholic growth in California. From that time on, the growth of the Catholic congregation proceeded hand-in-hand with the shepherd of the Lemon Grove community. This Sunday morning group of faithful who attended the humble Church of Saint Theresa of the Child Jesus on Lemon Avenue grew through the years into the well-organized parish of St. John of the Cross which we know today.

The first Pastor of Lemon Grove, Rev. Fr. Joseph C. Mesny, was known as the much beloved shepherd of the old and new San Diego. It was his consolation and delight to be able to minister to the needs of the community. Many are the memories of the tender acts of charity carried out by Father Mesny. He would delegate some of his helpers to go out furnished with food and alms to visit the poor and impoverished.  Father Mesny was instrumental in the early stirrings of community spirit in the 1920's and 1930's.

In the late thirties,  Monsignor Daniel O'Donaghue became Pastor and the construction of the new church officially began. The new church was dedicated on May 5, 1940 with a seating capacity of 140. The edifice was dedicated to His Excellency, the Bishop of San Diego, on the Feast of San Angelo. Monsignor O'Donaghue has recourse of other by his appealing means of spreading the sweet message of the Gospel and his intention to spread good wholesome Christian Joy. It was Monsignor O'Donaghue who initiated the famous Lemon Grove Rodeo and Fiesta, a popular event for the entire community.

Meanwhile in 1948, St. John of the Cross School was built and the parish was extremely fortunate in obtaining the services of a distinguished Order, the Sisters of St. Joseph of Orange, to staff the parochial school. The initial enrollment was 187 pupils. The following year, 1949, was the beginning of the Parent Teachers Guild and the Boy Scouts and Girl Scouts started troops for the St. John's children. Legion of Mary began their work during the late forties.

At the close of the decade, Monsignor John W.  McDonagh was appointed Pastor to the Parish. It was under him that the enlargement of the old church was undertaken and the edifice was once again dedicated on January 27, 1952 with a seating capacity of 525. The church schedule has already reached the scale of six Masses each Sunday with six different congregations filling the Church at each Mass. Monsignor McDonagh took over the reigns with energy and determination in driving ahead with further development of the Parish which is now confirmed by the sight of the glorious edifice erected along the sweep of Broadway. The Church is without doubt his most glorious achievement during his tenure here at St. John of the Cross. It is a credit  to his wise planning and direction that he coped successfully with the overwhelming influx of California and San Diego postwar settlers and service families which augmented the parish  responsibilities considerably. Under Monsignor McDonagh, too, the number of Baptisms, Confirmations, Marriages and Sunday Masses had surpassed all previous records. 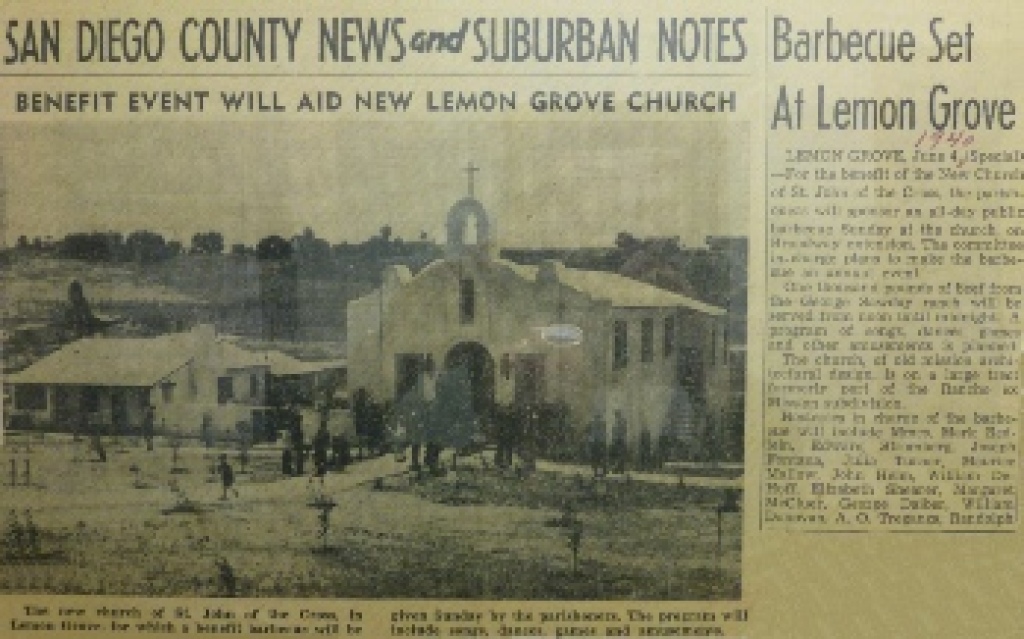 The early fifties brought the beginning of a Catechism program, Catholic Daughter of America were established and the Knights of Columbus were formed. February 22, 1959 brought the final construction of the new church, dedicated by Bishop Charles F. Buddy.

In 1969, Monsignor Patrick J. Kearney became Pastor and remained until 1977. The seventies brought much activity to the parish. The Prayer Group began in 1971 with the Hispanic Community and the Filipino-American (FIL-AM) Society.   The St. Vincent de Paul Society was also established. The Parish Council was formed and the Women's Club was organized in 1973. The first Festival started in 1973 and the Parish Hall and the new Rectory were completed during this decade. The older Rectory became the home of the Youth Group and the Pre-school.

Monsignor J. Raymond Moore became Pastor in July of 1977.  Deacons Peter Corrao, Ralph Robbins and John Stenbeck were ordained in 1978 and 1979. He was instrumental in the construction of St. John's Plaza, and apartment complex intended solely for senior citizens on limited incomes. Lemon Grove became a City in 1977.

July of 1986 brought Monsignor Raymond C. Kirk to St. John of the Cross as Pastor. Deacons Juan Francisco Santoyo, Martin Villafana and Manuel Nunez were ordained in 1993. Deacon Manuel Nuenz was assigned by Bishop Brom to serve at St. Jude Shrine of the West in San Diego. The Sisters of Mercy of the Blessed Sacrament came to staff the parish school in 1986 until the present time. Through his unending efforts and guidance, the Kirk Center (a multi purpose building) named in his honor, was built and has tremendously benefited all the church ministries;  functions, meetings and different parish activities. It was during Monsignor Kirk's time that a major renovation of the church took place in 1995. The altar area was designed with beautiful granites and marbles all over. The Baptismal area was relocated just at the main entrance of the church under a dome edifice. The frontage of the church had a beautiful gathering area with handicapped accessibility and parking. 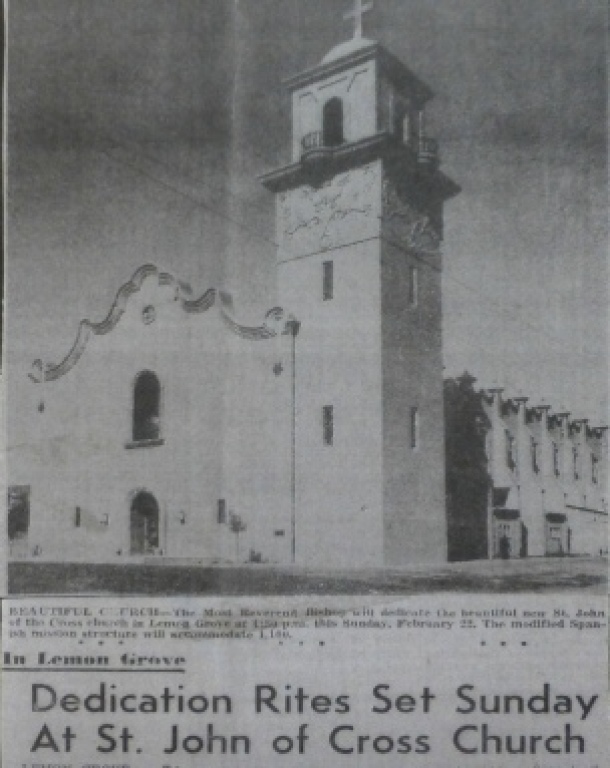 Monsignor Edward Brockhaus took the place of Msgr. Kirk in July 1997. Ever since his arrival at St. John’s  he got a vision of doing something special to benefit the parishioners and the community as well. He took that bold of  "Building Together" as his slogan. From that time on, he was heading a major construction project consisting of a new parochial school, new parking lots surrounding the church and the ground beautification of our church. When Monsignor Brockhaus retired in June 2010, Fr. Peter Navarra took his place as pastor of the Parish from July 1, 2010 to June 30, 2019. Father José Luis Muro became pastor of St. John of the Cross Parish on July 1, 2019 to the present.